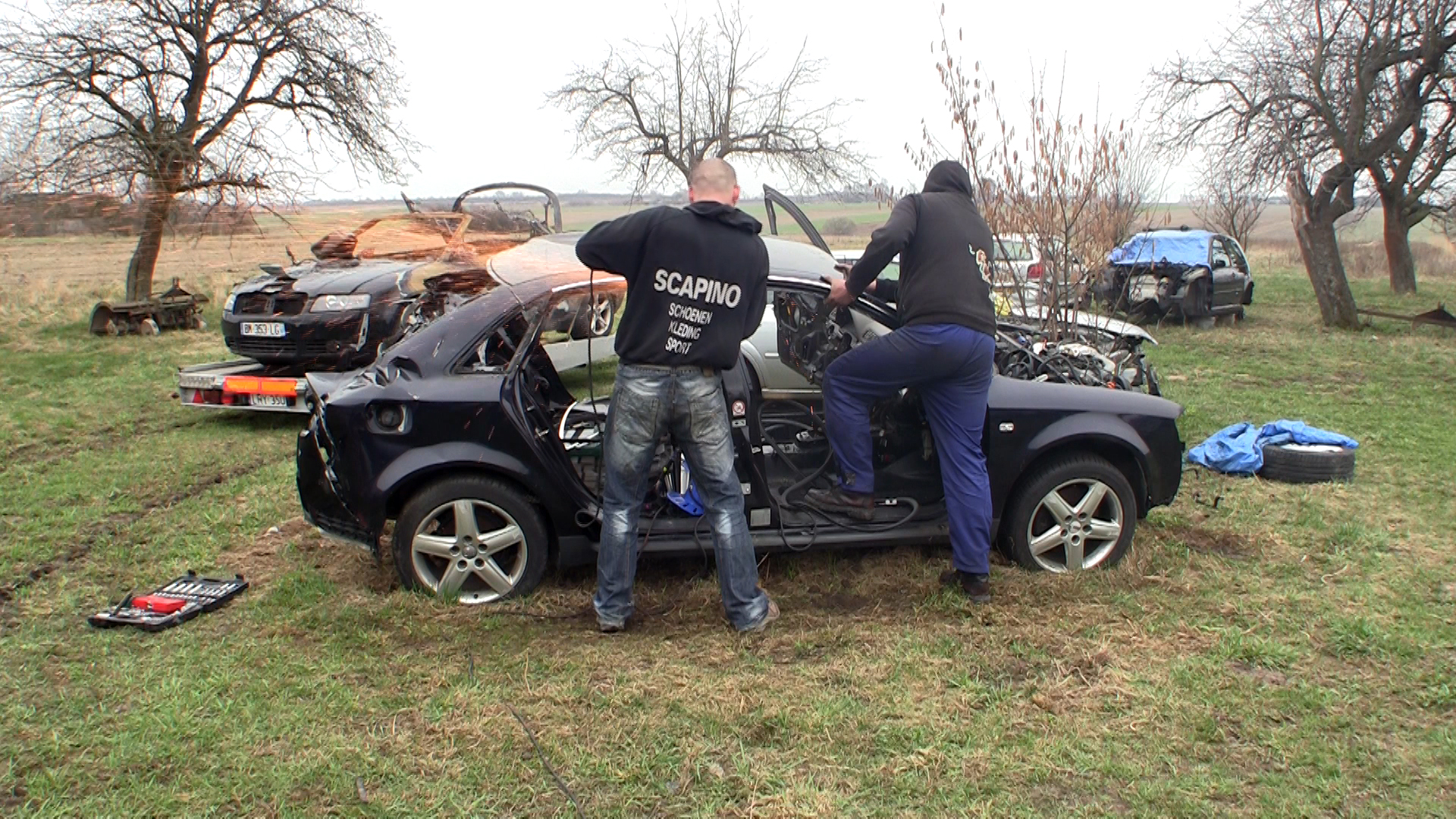 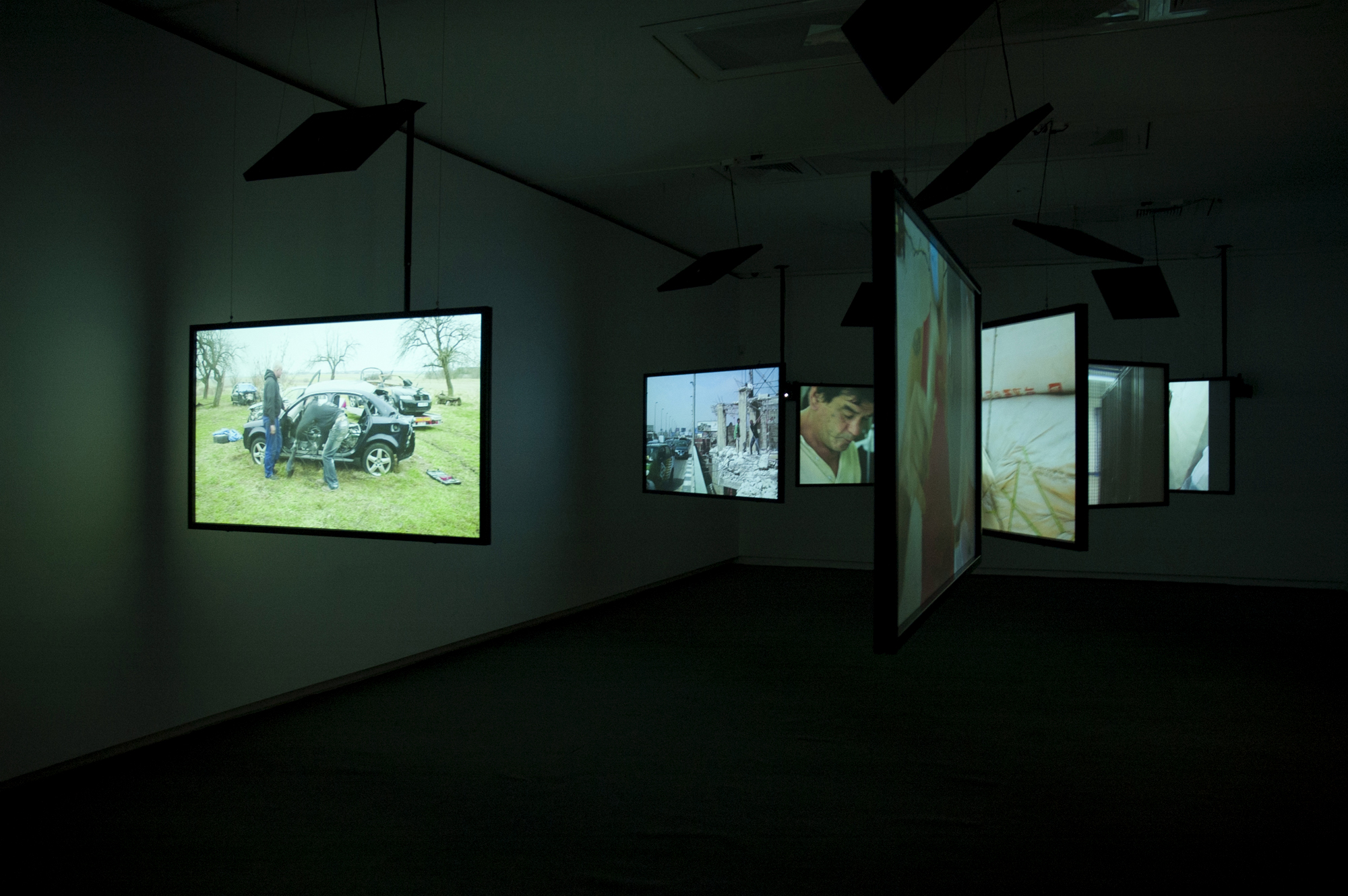 Part of „Labour in a single shot” asembling, documentary project by Harun Farocki and Antje Ehmann. Presented so far in the Museum of Art in Lodz, Goethe Institutes in Montreal and Athens, Haus der Kulturen der Welt in Berlin, the Venice Biennale, is an imagery attempt of contemporary forms of work and also description of changes and the current state of the economy.

A more distant, objective approach to the labouring subject marks Filip Gabriel Pudło’s Surgical Instruments, shot during the 2013 workshop in Łódź, Poland. 22 We watch a man in surgical scrubs preparing instruments for the operating room. The camera is static, though it appears to be held by hand rather than mounted on a tripod. From a discreet remove, we observe the highly precise, almost mechanical gestures of the hospital worker from an angle that opens up visual access to the stainless-steel countertop on which he sorts the materials. He first enters the scene with a confident, direct approach that grows in precision of movement as the video progresses. The tools are checked against a written list on a piece of paper, which the man consults repeatedly as he groups the objects and gently places them in a glass tray. His motions are intriguing: although his task only involves preparing the tools for use in a subsequent surgical procedure, he is highly efficient and brisk, wasting no gesture as he shifts between instruments, tray, and paper. Although we cannot read the list, it is clear that each tool has a specific function designated by its name. In this video, the instruments exist in a state of potentiality rather than actuality, though one surmises that they are about to be deployed by a surgeon; they are static, waiting to be picked up. At the same time, the quiet atmosphere of the room, with no audible speech to contextualize the labour soon to be performed, adds to a sense of dormancy, of work deferred rather than prepared. The tools appear in this way to be the actual subjects of the video; they thus acquire agency in spite of their stillness. With his own measured bodily movements, the surgical assistant seems to possess the same type of mediator status as the instruments themselves.
Given the extensive cinematic history of the activies that take place in hospitals and surgical theatres, the instruments inevitably call to mind images of the people and objects they will encounter when deployed: doctors, nurses, machines, gurneys, and blood. With no words to help the viewer comprehend the utility of the surgical instruments, and with the checklist visible only to the worker, the formation of “grips” (both concepts and tools) in the hospital comes across as a highly specialized endeavour. The care with which the Łódź surgical assistant arranges his materials while consulting the list of terms is tied to this preservation of the grip. Because his command of the instruments is institutionally determined rather than linked to individual invention, it holds a secure place in a chain of events that require strict oversight. Here Negt and Kluge’s link between the grip and conceptual grasping, as an expression of comprehension, is made explicit: inthe hospital, lives depend quite literally on a reliable relationship between the tool and its name. The camera reveals a behind-the-scenes moment of preparedness, the accuracy of which has major consequences. Though the necessary skill required to deploy these tools is not demonstrated on camera, the instruments, even in their state of rest, evoke reliable and consistent functionality. They are presented as intermediaries that will soon take on a more active role as mediators; again, mediation is registered as potentiality. This scene captures a moment before the start of the surgeon’s work, when the toolstake on a vivid, yet passive, presence as their shiny surfaces glint against the backdrop of a metal counter. They have not yet touched a body in anoperation, but it takes little imagination to picture them in use. In “The Work of Art in the Age of Mechanical Reproduction,” Walter Benjamin compares the work of the surgeon with that of the magician, claiming that the former physically penetrates the body of the patient whereas the latter merely “heals a sick person by the laying on of hands.” For Benjamin, this analogy can be extended to the relationship between the camera operator and the painter. He prioritizes the labour of the cameraperson, whose Walter Benjamin, “The Work of Art in the Age of Mechanical Reproduction,” inprobing activity stands in contrast to the painter’s remove from a givensubject: “The painter maintains in his work a natural distance from reality, the cameraman penetrates deeply into its web.” By focusing on the surgery preparations, Pudło uses his camera to enable the instruments to stand in for, even to prompt the viewer to envision, the probing activity of thesurgeon who will soon use the tools.